Pipeless Pedicure Chairs are pedicure chairs that are designed to create whirlpool jets in the water without using any internal pipes.

Instead, these Pipe free Pedi chairs rely on submerged fans or propellers to create that gush of water.

The rapid movement of the water is what massages and soothes your client’s feet.

These fans can easily be detached and sanitized after each pedicure.

Almost all modern Pedicure Chairs are pipeless and it’s important that you as a salon owner understand what that means and how it affects you and your business.

Pipeless Pedi Chairs do require plumbing such as drains and external pipes.

Whilst a No Plumbing Pedicure Chairs are just plain basins or tubs that you have to manually add and remove water as needed.

You can click to read my article to understand more about No Plumbing Chairs.

Table Of Content show
Why Invest in a Pipeless Pedicure Chair
Cons of Having A Pipefree Pedicure Chairs.
What is a Disposable Liner and a Magnetic Pipeless Jet

Why Invest in a Pipeless Pedicure Chair

1- Easier to Clean and Improved Sanitation.

Pipe free Pedicure Chairs are a lot more hygienic than the older models of Pedi chairs which used pipes to create the whirlpool effects.

You see with those old piped Pedi chairs is that dirty water has to be constantly circulated through them.

Whilst the water is circulated through the pipes bacteria, dirt and other sediments from your client’s feet will get lodged inside the pipes.

These bacteria and fungi can pose serious health risks, the most common being Staph Infections and Mycobacteria Infections.

Older piped Pedicure Chairs are much harder to clean, they tend to be small and narrow, imagine having to clean them after each pedicure.

On the other hand, Pipeless Pedicure Chairs use fans which can easily be detached and disinfected after each client.

Finally, with new magnetic jets, you can even have the whirlpool effect whilst using disposable liners, gonna explain this more in-depth later down, so keep on reading.

2- Being Compliant With The Law

There is a general push in the salon industry to move away from the old fashion Piped Pedi Chairs and soon or later I believe that our laws will also follow suit.

And I have a strong feeling it will one day be mandated rather than optional.

Why I think so is that because it has already begun in some parts of the country.

Even the Federal Government via the EPA has strict cleaning guidelines for salon owners to follow.

Right now different cities, states, and even some municipalities have varying rules and regulations that each salon needs to comply with concerning the proper cleaning of your Pedi Chair.

Some areas even mandate that you keep a written log to keep records to show the date when you clean your Pedi Chairs.

My best recommendation is to check with the body that governs licensing and regulation of salons in your area so that you can be fully compliant.

And then after being compliant go the extra mile be preemptive and think about your client’s wellbeing.

Clients are now actively asking questions about their salon’s cleaning practice’s, light has been shined on this topic and the awareness is there and it’s not going anywhere in a hurry.

My advice is that you can do a quick walk through with your clients, the various cleaning mechanisms and procedures that your salon has to keep them safe.

I firmly believe that you as a salon owner owe it to your clients to protect them by providing the most hygienic services possible.

By having Pipeless Pedicure gives you the ability to market your salon as being more hygienic and more upscale.

To do so highlight to your clients that you have invested in the most modern and sanitary Pedi chairs on the market.

Cons of Having A Pipefree Pedicure Chairs.

The biggest issue with pipeless Pedi chairs is that the fans that are used to create the whirlpool jets can be damaged with wear tear over time.

With all devices wear and tear is inevitable.

Previously these jets were created using the pressure from a pump and a group of pipes which tended to be more sturdy, but the obvious drawback is that these pipes were unhygienic.

This is because the newer chairs have more electrical components such as the propellers which are more costly.

What is a Disposable Liner and a Magnetic Pipeless Jet

Most salons now tend to use disposable liners for their Pedi Chairs, which are flexible plastic wraps used to cover the inside of your basin which prevents dirty water from even touching the bowl.

Since these plastic liners are disposable, each client would only use one and then its thrown away making your every pedicure even more sanitary.

The problem with using disposable liners is that they cover the entire bowl even the fans that create the whirlpools.

The solution to this problem is using a Magnetic Pipeless Jet.

These magnetic jets come in 2 parts, the motor and the fan.

The motor is attached to the bowl itself, it is then covered over by a plastic liner, the fan is then placed on top of the motor, yet is separated by the liner

The motor and fan can work even though there is a barrier between the two due to magnetic coupling technology.

Now once the jet is turned on the electromagnet powers on and turns the fan to create the whirlpool jets.

I would advise most salons to incorporate disposable liners and if they can afford it use a magnetic jet.

You can click to see the price of my recommended disposable liners on Amazon, these liners are pretty tough and can fit most basins.

Or Just Buy a Pedicure Chair that comes with a Magnetic Pipe, click to see the price of one on Amazon.

Juliet Pammy Sookram is an experienced writer and a part-time Nail, Hair, and Makeup Consultant. Her goal with Easy Nail Tech is to help others have amazing manicures and healthy nails. 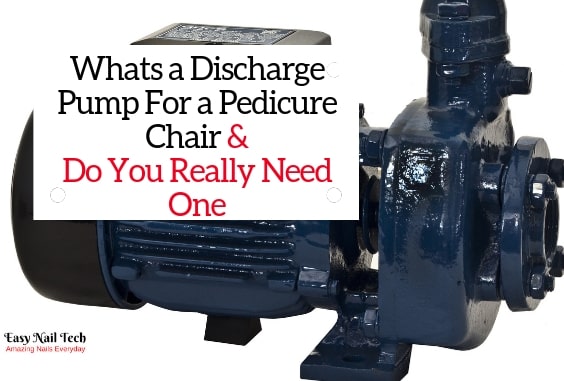 A Discharge Pump is used to pump and move dirty water from a Pedicure Chair to a drain point that is above ground level. Discharge… 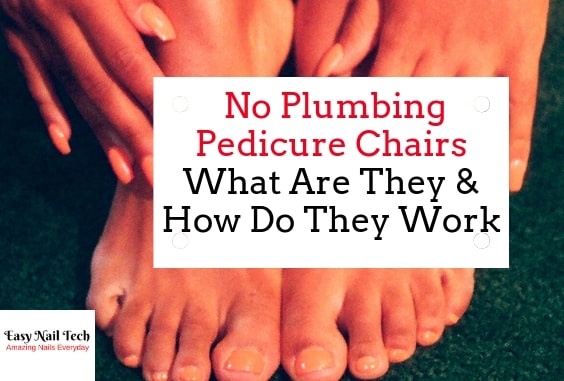 The amount of weight that a Pedicure Chair can hold will vary with each chair model, but on average these chairs can handle around 250-350…