Making your nails glow in the dark is easier than you think, with the right nail polish your can make your nails look amazing when the lights are out.

So in this article, I am gonna share with you the best nail polishes to make your nails safely glow in dark.

The Best and Safest Glow in the Dark Nail Polishes are:

Types Of Glow in The Dark Nail Polish

Now before you buy a glow in the dark nail polish, its important for you to understand the Two Types of Glow in the Dark Polishes;

Black Light Polishes would only light up when a Black Light or UV Light is shined on them.

These nail polishes take in the UV light from a black light and convert it to visible light. Citation 1 and Citation 2.

Natural Glow in the Dark Polishes can glow without an active source of UV Light and would light up in the dark.

These Polishes work by storing energy from UV light from a natural source or a UV lamp and releasing it as light in the dark. Citation.

Just remember you would need to charge them up either in the Sun or in a Bright light before they glow in the dark. Citation.

FairyGlo Polishes are currently the glow in the dark nail polishes that I use and recommend.

They are Natural Glow Polishes meaning they would naturally light up in the dark, they don’t need a black light to glow.

FairyGlo Nail Polishes will last for up 2 to 3 weeks, once properly cared for.

How long Does Glow in the Dark Polish Glow For

How long they shine in the dark would depend on the length of time they were exposed to a UV light source and the brightness of that light.

The longer the polishes were exposed to a UV light source such as sunlight or a UV lamp the more the polishes would get to charge up allowing them to glow for a longer period of time.

If your nail polishes stop glowing just expose it to sunlight or a UV lamp to charge it up again.

Currently, FairyGlo has the most variety of colors.

From blue, pink, green to a bright yellow, you are bound to find a color that goes with either your outfit or a special event.

3- Looks Good During the Day

One of the problems with most glow in the dark polishes is that they don’t look so impressive during the day.

The great thing about FairyGlo is that they have an amazingly bright and smooth color during the day and night.

FairyGlo Nail polishes are one of the most widely used brands of glow in the dark nail polishes.

So you know it’s been tried and tested by hundreds of women.

These polishes are a great value and they come in various affordable packages with each having different colors available.

In General most glow in the dark polishes are pretty easy to apply and FairyGlo is no exception.

I found a short video on how to apply FairyGlo, you can check it out below.

For UV Lamps you need to let it cure for 2 minutes and if you use a Led Light 1 minute.

FairyGlo Polishes are gel based and like all gel polishes, you would need either a UV lamp or Led lamp to make them dry and cure.

So you would need to have a UV Lamp thankfully UV lamps are pretty affordable, you can click to see the price of budget on Amazon.

Gel polishes, in my opinion, are worth the extra effort, they are much stronger and they have a nice glossy look to them.

Where To Buy FairyGlo Glow in the Dark Polish

I usually get FairyGlo on Amazon, who usually have them at a discount you can click on the links below to see the current price.

Blue Glow in the Dark Polish

Green Glow in The Dark Polish

Pink Glow in the Dark Polish

Yellow Glow in the Dark Polish

The packet of six is probably the deal with the best value especially if you are trying them for the first time.

Except they are a bit more expensive. I consider them a more premium brand than FairyGlo.

They are Natural Glow Polishes and they would light up in the dark without the need for a black light.

Where to Get ULG Nail Polish

You can click to see the price of a set of four 10 ml polish on Amazon.

Meaning they would only glow under a Black Light or UV Light such as those found in Clubs and Discos.

Advantages of Splash and Spills

Cons of Splash and Spill

Who Should Get Splash and Spill

Where to Get Splashes and Spills Polish

You can buy them on Amazon click to see the current price of a Six 13 ml pack.

Also, you can click to see the price of a really affordable black light on Amazon They are ideal for parties.

Emory Polishes are the most Budget-friendly glow in the dark polishes I could find.

They are regular polishes, not a gel type, so you won’t need a UV Lamp.

I have never tried Emory before but they have been around a while.

And because of their affordability, I wanted to include them.

Emory Polishes seem like they work best if not only under a black light.

You can click to see the price of a package of twelve Nail Polish on Amazon.

Santee Polishes are another well known Budget Glow Polish, I have not used them yet so if you have tried them please leave your opinion in the comment section.

These Polishes are natural glow polishes so they shouldn’t need a black light and also, you won’t need a UV lamp or Led Lights.

Santee Polish comes in small mini bottles you can click to see the price of Santee Glow Polish on Amazon.

Like all Natural Glow Polishes, the Big T needs to be exposed to sunlight to charge up before they can glow in the dark.

Big T topcoat can be used with any of your favorite nail art or polishes and they will make your nails light up in the dark giving them an iridescent look.

Now if you use a smooth polish as a base coat the nails will have a smooth glow.

Where to Buy Big T Ranch

Amazon usually has them in 15 ml bottles, gonna leave links below, you can click to see the current price.

Are Glow in the Dark Nail Polishes Safe?

Glow in the Dark Nail Polishes are as safe as any other nail polishes available.

All Nail Polishes that are sold to the public are subjected to the Federal Food, Drug, and Cosmetic Act. Citation 1 and Citation 2.

This act means that all polishes including Glow in the Dark Polishes need to be tested for any possible health risks before being sold.

Now, of course, there can be rare outlying variations such as allergies and occasional rare bad batches that may pose a health risk.

All products come with this inherent risk.

All glow in the dark polishes and nail polishes, in general, are not meant to be consumed and should be kept out of reach of kids.

Why Do People Think Glow in The Dark Items Are Unsafe?

This misconception comes from the fact that the old method of making glow-in-the-dark products was the use of radioactive materials such as radium and tritium.

These materials naturally radiated light in the dark allowing it to glow but they also emitted dangerous radiation and because of this radioactive materials are inherently dangerous. Citation.

Now today the main ingredient used to make glow-in-the-dark products is Phosphors, which doesn’t have any of the harmful effects of previous radioactive materials. Citation.

Phosphors work by absorbing light to charge up and when they are in the dark they slowly release visible light giving you the glow in the dark effect.

You can click here to read more about Color-Changing Nail Polishes.

You can click here to learn more about holographic nail polishes. 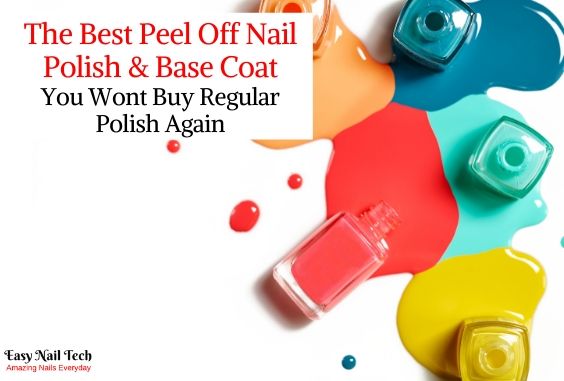 Peel Off Nail Polishes are some of the safest types of nail polishes available. This is because most of them are water-based which means they… 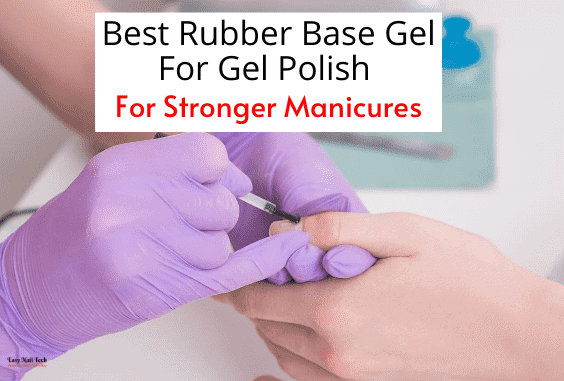 Using a base coat and a top coat is essential when working with gel polishes. They allow you to have amazing gel manicures that are… 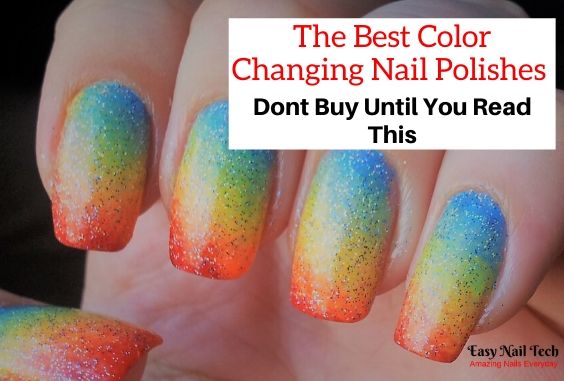 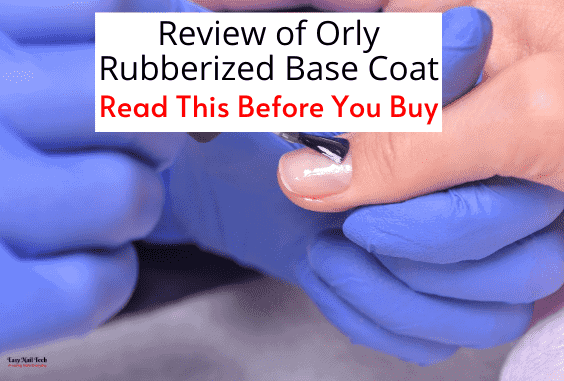 Orly Rubber Base Coat is one of the best base coats that I have ever used. They are affordable and yet still amazingly effective as… 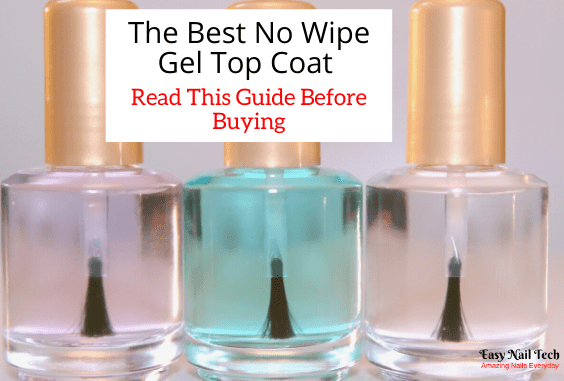 The Best No Wipe Gel Top Coats are: Aimeili – (The no wipe gel top coat that looks & cures the best) Beetles – (A…